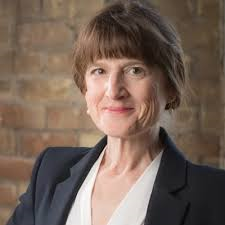 Angie Dickison joined the Minnesota Department of Employment and Economic Development (DEED) in July 2019 to serve as the Broadband Development Manager.In this role, she oversees a portfolio of $85 million dollars in broadband infrastructure investments across the state and works with various stakeholders – including the Governor, legislators, providers and communities – to promote broadband development initiatives throughout Minnesota.

Prior to joining the team at DEED, Dickison served as the State Broadband Director for the State of Wisconsin. Dickison led broadband strategy and program development efforts within the state. Working together with industry and community stakeholders, she helped launch a first-in-the nation Telecommuter Forward Community certification program. She was appointed by FCC Chairman Pai to serve as a member of the FCC’s Intergovernmental Advisory Committee. Dickison also served as the technology director for Lake County, Minnesota where she was actively involved in rural broadband development. She served as a member of the Blandin Foundation’s Broadband Strategy Board; and was appointed by Governor Dayton to represent rural Minnesota communities on the Governor’s Broadband Task Force.

Internet Connectivity for Rural and Outstate Communities for Health Panel