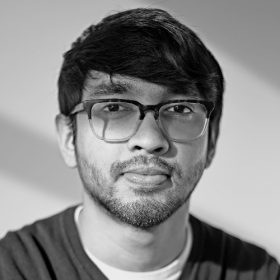 Madhu is a software developer, an electrical engineer, a researcher, and a dreamer. He loves to undertake creative design challenges, and he takes pride in making things with a purpose.

In the technical arena, he has spent the last five years developing his skill set in software development and testing, rapid prototyping and designing intelligent IoT-enabled systems.

Madhu began as a student researcher at a liberal arts college, where he worked for a particle physicist searching for dark matter. Then, he worked for a nuclear physicist who was studying Quark-Gluon Plasma. He gained invaluable experience in programming and hardware testing, and also a deeper understanding of the universe. Perhaps more importantly, he was able to make a lifelong connection with a fantastic group of people who shared his passion for innovation and creativity.

While in electrical engineering school, Madhu quickly developed a fascination for building embedded devices as it allowed him to create something that could bridge software with the physical world. In Spring 2016, he won the IoT Project Showcase for prototyping a smart glove that enabled people to text by flexing their fingers. This inspired him to start a university-funded project that used EMG sensors to recognize gestures via machine learning. Realizing the immense power of artificial intelligence, he decided that he wanted to add this to his ‘engineering toolkit’, so during his senior year, he helped to develop a computer vision algorithm that could track human behavioral patterns to aid in the diagnosis of disorders such as autism and ADHD. He also worked with a team on a deep learning program which would help to detect sickle cell diseases in mice.

Every single one of these projects brought Madhu immense satisfaction, and helped him realize what he wants to achieve in life: He wants to learn, He wants to collaborate, and He wants to invent.